Kirstie grew up in Essex but has returned to her father’s hometown of Glasgow. From a musical family she began playing the piano at the age of 4 and took up the oboe when she was 12. Her studies continued at the Royal Northern College of Music in Manchester under the tuition of Peter Graeme, (a member of English Chamber Orchestra and the original oboist for Benjamin Britten’s chamber operas). At the R.N.C.M. Kirstie was awarded The Frederick Nixon Black prize and graduated with a G.R.N.C.M. Hons. Since graduating she has worked extensively with many major U.K. orchestras and opera companies, and most poignantly to her, the Royal Opera House, Covent Garden where her mother was a ballet dancer when it reopened after the war. In 1995 Kirstie was appointed Principal 2nd oboe and cor anglais with The Orchestra of Scottish Opera and in addition to music making has just graduated as a BSc Hons in Psychology at The Open University.

Richard Blake studied with Lynda Coffin and later with Edward Beckett at the Guildhall School of Music. Whilst still a student, he was appointed Principal Flute with Opera North. He subsequently returned to London to pursue a freelance career regularly appearing as guest principal in concerts and recordings with the London Symphony Orchestra, London Philharmonic Orchestra, the Philharmonia Orchestra and Royal Philharmonic Orchestra under such conductors as Claudio Abbado, Sir Georg Solti and Klaus Tenstedt. He also worked regularly with the London Sinfonietta both in the UK and in the USA and appears on several award winning recordings with them, both as soloist and guest principal. Richard was a founder member of the Prometheus Ensemble with whom he has made several critically acclaimed recordings. Since joining the Orchestra of Scottish Opera as Principal Flute in 1993, he has remained in demand as a guest principal in London and around the UK. He is a member of Paragon Ensemble and Solway Trio and is a professor at the Royal Conservatoire of Scotland. 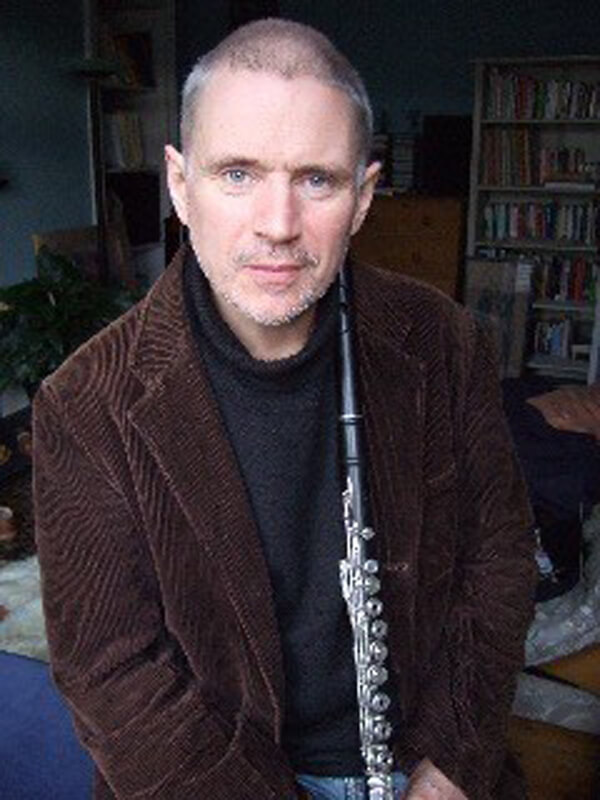 Nicholas Ross was born in Essex in 1955.He grew up in Surrey where at primary school he was persuaded to take up the clarinet to make up the numbers in the school orchestra. He continued his education at Oakham Boarding School in Rutland and it was here that he won the Associated Board Gold Medal for the highest marks in the UK for Grade Eight and started his studies with John Davies FRAM his future professor at the Royal Academy of Music. He also had his first experience of playing in Scotland at the Dunfermline Music Festival in the orchestra conducted by Christopher Seaman. He was allocated digs with a Mrs C. Sharp! Whilst a student at the RAM he won the Clarinet prize, the Craxton prize and represented the RAM on chamber music exchange trips to the Frankfurt and Antwerp Conservatoires. In his third year at the RAM Nicholas gave his debut recital at the Wigmore Hall, which the Times said he gave with “outstanding aplomb”. Nicholas Ross is currently section principal clarinet with the Orchestra of Scottish Opera, which he joined in 1980 as a founder member. He has broadcast chamber music both at home and abroad.

Janet Bloxwich studied at the Royal College of Music then freelanced in London for 2 years until being offered Principal Bassoon with the Orchestra of Scottish Opera. Since then she has worked with all the other orchestras in Scotland as well as the Polish Chamber Orchestra and Northern Sinfonia. As well as teaching at the Royal Conservatoire of Scotland, repairing instruments, making and selling bassoon and contrabassoon reeds any free time is spent painting (some of which she has sold) and hill walking.

Alan studied at the Royal Academy of Music. He worked as a freelance musician in London from 1973-84, as a member of Kent Opera Orchestra, and playing with most major London orchestras. Alan joined the Orchestra of Scottish Opera in 1984 as sub-principal bassoon and principal contrabassoon. His main passions apart from music are hillwalking in Scotland (238 Munros so far) and the Lake District, and enjoying food!